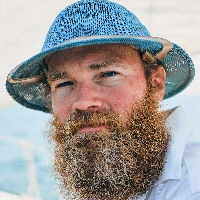 Follow along here for daily updates and position reports

December 31: After reaching the relative safety of St Helen Sound as the sun set, we had one last test from Mother Nature. Massive thunderstorms and rain all night! For the last 25 miles of winding shallow river, I had to stand tall in the cockpit as lightning bolts crashed seemingly everywhere! But just before midnight, with the help of some great friends, we docked Sparrow and tied her off after 73 days and almost 8,000 miles at sea! Thanks to everyone for the support with the MS fundraiser and well wishes along the way. It was a scary trip but sometimes that's the best kind of adventure! Happy New Years!!! (32.4196, -80.6581)

December 30: Last day on the open sea! By sunset we should be motoring our way inland along the ICW. Calm waters and a long night ahead but by morning we should be safely tied to a dock! And I am sure dead asleep within minutes!  All is well. (31.7099, -79.9678)

December 29: Last full day offshore! I can't believe it, it's been one month since the turn around and 72 days since leaving Rockland. Not the adventure I planned but an adventure for sure! Still have the Gulf Stream and another night dodging shipping traffic so I have to stay on my toes!  All is well. (29.5135, -78.6597)

December 28: Beautiful calm night under the stars. Lots of traffic moving around out here. 1,000 foot ships coming and going. Winds should build today and send me right where I want to go. I can already smell land and see it in the color of the sunsets. All is well. (28.2649, -77.2012)

December 27: The winds have calmed and it looks as though we will have a calm patch for today and then get a good wind shift sometime soon. With a bit of luck we will make the dock on the 31st, just in time to ring in the new year from land!  Cleaning up Sparrow to pass the time today. (27.3816, -76.8617)

December 25: What a day, can't seem to catch a break, water in the oil and no engine for a while. We are just able to move but not much with almost no wind. Hoping to turn this Christmas around and get everything fixed before I go crazy!!!  Haha what an adventure this has been. (27.2357, -75.2850)

December 23: Another long night of wild winds, calms, rains and waves but we made it through and around 6 am the winds have held from the NE. Still rocking over head seas but it should get better soon. Hopefully my Xmas gift. Hope everyone enjoys the night!  I'm off to sleep some more. (26.1270, -71.5420)

December 22: We have hooked into the South edge of a big system steaming out to sea! We have had great wind all night and should get rain by this evening, much needed! Then it looks like the normal pattern of variable sailing to reach Port Royal Spund. Less than 600 miles, maybe 7 days away depending on the wind :) (26.3655, -70.9632)

December 21: Calm conditions have arrived!  It will be short lived but much needed. The engine came to life without much issue last night and we made great miles under the bright moon. After a few stops for sleep, the engine is very loud, the winds have filled in and are light but steady. All we need now is a little rain for a shower and some clean water to drink. That is what I want for Christmas! (25.1836, -68.5508)

December 20: So the new challenge is to get back for New Years, the winds are getting variable as we get further North and reading the weather will not be easy. Also have to keep the pressure off Sparrow so we make it back in one piece. With a bit of luck, we just might make it in time for champagne! (24.5806, -67.3660)

December 19: The Squalls started again just after sunset so it's been a long night. Very glad to have the moon, my best friend out here, to help me spot any big ones suddenly there is less than 1,000 miles to go and the end of this adventure is creeping in. Winds look good for a few days then we will see. All is well. (23.7659, -65.2648)

December 18: The seas have eased up after the last two days, very glad to get less beaten up out here. Looks like the calm will be in a few days and I will get the chance to sort out the engine and switch the mainsail amongst other things. I'm sure we will have a bit of weather before landfall. 1,000 miles to go! (23.1093, -62.8444)

December 17: Winds picked up with Gus last night!  The seas are still maxed up and steep but manageable. We were down to small sails but still flew through the night. For the next 1,000 miles the weather will be variable and always changing with systems coming off the coast. Just going to keep hoping for New Years! (22.1582, -60.4059)

December 16: Winds are cranking up for the next day or so!  Will be flying right along and then into a calm patch. Hard time sleeping with the lumpy seas but as we get closer to home I'm sure it will be even more difficult with the excitement that always comes with landfall. 10-14 days I think! (21.2381, -58.0136)

December 15: Looks like more wind on the horizon and no rest aboard Sparrow. Up all night with squalls and more to come. We are holding up well, just tired. Less than two weeks depending on how the weather shapes up after I leave the Trades for the systems coming off the coast. Will be a battle for sure. 1,500 more miles. (20.1217, -55.6814)

December 14: We had a great show of shooting stars early this morning. A constant stream of them big and small. Hope to see the same tonight!  Winds seem to be easing and hopefully we will get a short break from the constant bashing and rolling for the last few weeks. All is well. (18.8366, -53.4476)

December 9: Pitch black nights continue under this never ending overcast sky. Though the qualms seem to have stopped the last few nights, sleep is not easy to catch but Sparrow pushes on each night and we are cutting the miles more and more. With luck it may be 20 days to landfall. (11.6187, -43.2615)

December 8: We are being given a show today, Flying Fish vs sea birds!  Sparrow scares hundreds of the fish from the water and then the birds dive bomb! Only one score that I saw in about 1,000 attacks. Crazy ocean world out here. Winds are good and we are making lumpy but fast progress. All is well. (10.4348, -41.0635)

December 7: Nighttime rains continue to keep us up at night, but the winds are holding and that's all that matters. These pitch black nights will soon give way to the returning moon and make the world much better. Lots of flying fish in the deck today. Going to start cooking them in the coming days! All is well. (9.2407, -38.7378)

December 6: Wild currents have taken hold out here. The ocean surface goes from mild and soft one minute, to a torrent of whitewater the next! It's a sight to see for sure. All from ocean rivers changing direction against the wind. I've seen this before but not with 6-8 foot waves. I feel like we are boxing not sailing! (8.2207, -36.2974)

December 5: What a change in the weather! Seems like the whole world has shifted its intent, the sun is out again and now we have steady winds from the NE, the trades! I was getting a little tired of the constant nights of squalls and little sleep. We should be getting back to normal sailing winds for a while now, happy! (6.7877, -34.1719)

December 4: The doldrums are alive and angry! We got pummeled by a huge squall this morning and the rain is just now letting up. I've been told this will break up just a bit more north and will be glad. It's nice to be clean and have fresh water but wow what a squall we had today.(4.7223, -32.7208)

December 3: Got the area of the deck sealed up and this morning no water got in! Lots of rain and squalls as I'm back in the doldrums again. It's been nice to have the... ...cloud cover and plenty of rain to catch. But the biggest plus is the temperature, the heat was killing me and now is much better. All is well! (3.2556, -31.2469)

December 2: Making good way to the North with small sails. Looked like we were going to be becalmed in the night but after some rain, the winds have stayed and we keep moving toward the NE Trades. If we are lucky, I will be able to seal the deck later today and then start sailing to the NW toward home not taking on any water since the change in heading and no longer pounding into the waves. Glad to see that! (1.2780, -30.3272)

December 1: No longer taking on water since sailing with the wind and sea. Still unable to do any work on the deck area until we hit a calmer area. Was able to sleep for longer than I have in a month last night! The motion of Sparrow is much better. Winds should be favorable for weeks to come in this direction also have the currents with us as we aim for the Caribbean. Still having trouble dealing with the change in this adventure but working it out. All is well. (-0.8023, -30.0172)

Growing up in Northern Michigan, Jerome Rand discovered his passion for sailing late in life. What first started as an enjoyable way to spend time on the small inland lakes, soon blossomed into a fifteen-year career both teaching sailing and delivering yachts all around the Atlantic.  As his passion for sailing continued to grow, so did the sense for adventure.

During a break from directing a sailing school in the Caribbean, Jerome thru-hiked the Appalachian Trail in 2012.  At the end of the 133-day adventure, a new goal was set for the coming years.  Starting from scratch, Jerome set out to sail alone and without stopping around the world. The 271-day voyage was chronicled in the book, Sailing Into Oblivion. Only a handful of boats 32 feet in length have successfully made the voyage.

Not long after returning to land, Jerome learned of his close friend, Scott being diagnosed with MS.  “I quickly realized that the challenges that I face alone at sea don’t even compare to what Scott goes through each day.  On the ocean, a sailor gives up control of the world around them, some days are good, and some days are bad but a sailor can always head for land, Scott is not so fortunate.”

Now a team, Jerome will be setting sail on his next adventure with Scott providing weather forecasting along the way.  The passage plan, in short, is to sail from the East Coast of the US, down the Atlantic Ocean directly for the Southern most tip of South America, Cape Horn.   Once around Cape Horn and into the Pacific, the goal is to circumnavigate the entire Pacific Ocean and return to Cape Horn before the winter Gales become unpassable.  With an estimated length of nearly 30,000 miles, the voyage could take as long as 10 months at sea, alone and without stopping.

Both Scott and Jerome are fortunate to be teaming up with the MS Society in hopes of fundraising for research and awareness about MS.  We invite everyone to follow along with daily updates and position reports.

Podcast:  The Sailing Into Oblivion Podcast on Apple Podcast and Google Play