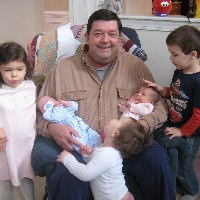 Bob, affectionately known as "Bobby" by his family, was a 1969 graduate of the University of South Carolina, and went on to a career in retail management that spanned almost 40 years.  He raised two sons as a single father at a time when that was almost unheard of, and did so with an incredible amount of patience and love.  Despite working a demanding job that sometimes required 60 to 70 hours a week or more, he somehow always made it to his sons' soccer and basketball games, track meets, band performances, and other events.  He instilled in them his great (and corny) sense of humor, his strong work ethic, his love of family, and his ability and desire to treat everyone with respect and dignity.  He loved spending time in the mountains, at the beach, camping, and fishing, with his sons, his friends, and by himself.  He died peacefully, with his sons who owe him so much by his side.

A funeral mass will be held at St. Mary the Virgin Mother Roman Catholic Church, Hartsville, SC at a later date.

Mr. Rhoad is survived by his sons, R. Dawson Rhoad, Jr. of Wilmington and Matthew Rhoad & wife Holly Eckhardt of Raleigh; grandchildren, Mason & Laney Rhoad of Wilmington, Rachel, Caroline, & Carter Rhoad of Raleigh and Olivia Eckhardt of Raleigh; sisters, Gerrie Hoffman of Middendorf, SC and Joan Rivers of Gaston, SC; brother, Jack Rhoad of McBee, SC; many nieces, nephews and extended family. He was preceded in death by his sisters, Rosemary Mothershed and Sally Horton, and his brother, Hank Rhoad.